Microsoft released Internet Explorer 7 Beta 2 for public consumption yesterday. Based on everything Id been reading, the development team seemed to be moving in the right direction. I decided to take it for a test drive to see how things were coming along. 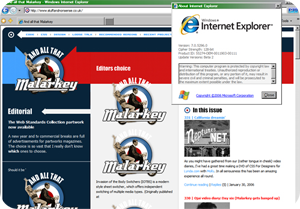 The answer is not well Im afraid. I took my first journey in the new browser over to my friend Andys house. I did this mainly because I love how Andy handles IE. Its beautiful. I wanted to see if IE7 did the right thing and got the real design for And All That Malarkey. As it began rendering, my heart was racing and I was ecstatic to see the beautiful blues and reds of Andys blog coming through. Then, something a little odd happened. Somehow IE7 missed the boat and the page was rendered virtually unreadable (except the latest articles section) because a bunch of And All That Malarkey logos kept popping up everywhere.

Now according to Chris Wilson over at Microsoft (whos team has been working closely with the wonderful folks at WaSP to make IE7 standards-compliant):

Beta 1 makes little progress for web developers in improving our standards support, particularly in our CSS implementation. I feel badly about this, but we have been focused on how to get the most done overall for IE7, so due to our lead time for locking down beta releases and ramping up our team, we could not get a whole lot done in the platform in beta 1. However, I know this will be better in Beta 2

At the same time, I know Andys a stand-up guy and his CSS is top notch, easily some of the best Ive seen, this problems gotta lie with IE7. I guess you can only expect so much from a beta (even a beta 2), but thats a doosie of an error. At least IE7 was easy to uninstall and Ive got some commentary to leave on the IE7 Beta 2 feedback form.